ok I have wandered into blogger heaven, this stuff writes itself, literally.

I went to see Bryn Oh's incredible new work The Brittle Epoch. I will write an actual post about it at length because it's amazing and very important Art but right now suffice it to say two thumbs up and then some, go see it here. Block off some time, you will want to go slowly, it's truly an amazing work of Art.

But that's not this post, this post is about blogging Art, jeepers this is a cool gig.

So I'm sitting under a tree and an apple falls on my head and I think hey!
Well, almost.

I was probably changing hair and a notice came through Bryn Oh's group, Immersiva, (link here) about a concert tomorrow, November 6 at 8am SLT, with some incredible musicians playing an hour each until noon when Colemarie Soleil brings the awesome with particles too.

I love when artists are just hanging around greeting and it turns out Bryn Oh has been doing that at The Brittle Epoch! I popped over there to get an LM to see where the stage would be for this story and OMG she showed me the stage for the concert, I'm expecting a stage, something that looks like a you know, stage.

No. This is Art. THIS is the stage. How amazing is this? I can't wait for this concert. 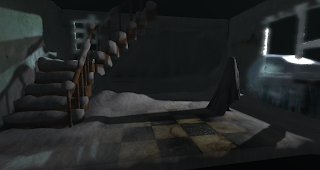 Everything I've seen Bryn Oh do has been simply incredible and producing a stage this beautiful for a concert is just an example. She is orders of magnitude ahead of us.
Here's the slurl for The Brittle Epoch, concert starts at 8am SLT see you there!!

Related Topics:
Up Next

You can’t spell party without art!

Slenderman, Bryn Oh and the Battle of Fair Use

How’s that for a title? I know, I’m in jeopardy of losing my ditzy persona here (trust me it’s not an act) but I’ve struggled with this post for a couple of weeks so I had to slip this line from a song in here.Once in a while you get shown the lig…

UN Women is a United Nations program that is dedicated to the empowerment of women. This year, they are asking that we raise awareness around the world with 16 days of activism against gender-based violence (25 November – 10 December) under the t…

UN Women is a United Nations program that is dedicated to the empowerment of women. This year, they are asking that we raise awareness around the world with 16 days of activism against gender-based violence (25 November – 10 December) under the theme of ‘Orange the World: Raise Money to End Violence against Women and Girls’

And beautifully, this has made its way into Second Life!

I found it through a bit of serendipity- I was literally going through destination guide and sworn I would go to the first one that didn't have snow in the picture or title and BAM a place called "Color the World Orange" checked all those boxes.

So I land and this is in the description:

Color The World Orange: Welcome to "COLOR THE WORLD ORANGE" - an awareness sim supporting UN Women's 16 Days of Activism Campaign Against Gender-Based Violence. The global theme for this year is “Orange the world: End violence against women now!”

I'm all in to help end violence so I cammed around and knew I had found a home when I saw a familiar face;

Lady Carmagnolle by Bryn Oh is one of those characters I see and my heart suddenly becomes a cartoon character that gently touches its own heart and goes awwwwww. And Milady the centerpiece of this garden.
(I'm not alone either- there was someone on a pose stand taking a pic with the statue when I snapped this pic!)
Then it gets better- this is The Creature from Mars! (a-lago) by Bryn Oh; 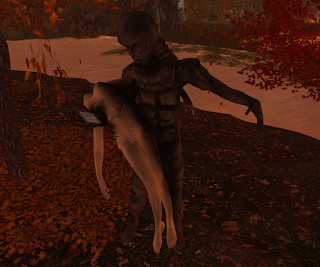 At first blush, a piece of art about a creature carrying a woman off to his cave would not be appropriate for a sim devoted to ending gender based violence, but this bit of wonderful satire is by Bryn Oh so it's working on way more levels than I even have.
The creature "learning how to grab a woman," on his phone finds a picture of a pussy cat, reference to the creature from Mar a Lago's famous line about grabbing women there, and the shifting online morals in that creature's wake. This was a piece created at that time and still drips with meaning.
So, camming around further, this place is fabulous and doubly so if you like the color orange. The lighting is bright and very easy to work with photography and there are a ton of great shots waiting for you. This campaign goes until Dec 10 but I'm not sure if the sim will stay open longer.
There are a number of amazing and beautiful works of art scattered around among a gorgeous landscape and wonderfully placed benches and seats scattered around for some solitary reflection or sitting or cuddling in a gorgeous, and orange setting.
There is a flickr contest and this place is simply incredible beauty for a great cause, go take a look!
Real world United Nations 16 Days Website page
Here's the in-world SLURL. Here's their Flickr group.
Continue Reading