This is a special blog post looking back over the past 12 months in terms of Second Life, Linden Lab and OpenSim. 2021 has been another eventful year with big announcements, some sad departures, celebrations and cool events.

2021 has been a busy year for blogging once again reporting about the expansion of the Bellisseria continent, the news that Linden Lab went under new ownership, the passing of Ebbe Altberg, the inworld map tiles not working, the ending of gacha machines, the revamp of the Second Life website/join page and much more.

Linden Lab started the year with big news announcing that the regulatory review has been completed and that Linden Lab is under new ownership. Randy Waterfield and Brad Oberwager signed an agreement to acquire the company announced in mid 2020. The migration of Second Life to the cloud was completed and mentioned in the 2021 Update: Life in the Cloud blog post.

Strawberry Linden talked with SLEA coordinator Tansee, Patch Linden (VP of Product Operations) and Brett Linden (VP of Marketing) on Lab Gab. This was the first Lab Gab episode of 2021 featuring a tour of the SLEA regions.

Inworld map tiles were not working throughout January and the lab restored the map tile functionality in the months that followed. Due to work on the Uplift.

Linden Lab announced a new round of Last Names because of the completion of the Uplift. The lab rolls out new rounds of last names throughout the year.

Oz Linden who was the Vice President of Engineering at Linden Lab announced on the Second Life Forums that he was leaving Linden Lab. Oz Linden joined Grumpity Linden on Lab Gab to chat about AWS and his years at the lab.

There was a new Second Life article on Quartz on how Second Life economy boomed during the Covid-19 crisis. There was a 60% increase in new user registrations compared to the year before. There was sustained growth in currency and economic activity.

Patch Linden VP of Product Operations talked about Linden Homes at RFL Home & Garden Expo 2021. Patch talked about the process and issues with the move to the cloud, testing of the new user experience, the old Linden Homes and more. The plans to roll out the next three Linden Home themes.

VWBPE 2021 opened on the grid and Patch Linden addressed Second Life community talking about education and non-profit organisations. Patch talked about the new owners, priorities over the year ahead, gateways, new user experience and much more.

Bellisseria celebrated it’s Second Anniversary celebrations on 15th April 2021. Bellisseria started with 384 regions and now there are triple the amount of regions on the grid featuring many nice Linden Home themes. The Moles and the Lindens have done a great job on expanding the Bellisseria continent during 2021 adding more new interesting areas and more Linden Homes like the Chalets/Fantasy ones.

Inworld map tiles was fixed by Linden Lab on 19th April 2021. Maestro Linden and Nat Linden worked hard directly on the re-coding of the Map Tile generation system for some time.

Linden Lab revamped the Second Life homepage featuring a big shiny blue Second Life logo that appears for a few seconds. A avatar is featured with Explore, Discover and Create near it. There are some quick links in the top right corner for Download, Marketplace, Language, Login and Sign Up.

The Kitely Market surpassed 500 grids milestone which is amazing. Exportables and listings have been increasing on the Kitely Market offering a useful way for OpenSim users to buy legal and legitimate content.

The Fantasy Faire raised almost 24 million ($95, 000 US Dollars) Linden Dollars for 2021 thanks to the Second Life community. This is all in support of Relay For Life and the American Cancer Society.

Linden Lab experimented with a new map feature on the east side of the Hippotropolis region in Second Life. A white compass medallion visually showed up on the World Map.

Ebbe understood Second Life and made a huge difference in so many ways. Like bringing in Project Bento, Mesh, EEP, annual snowball fights, attending big events, reduced mainland costs, launched the second generation of Linden Homes and much more.

Second Life 18th birthday (SL18B) opened to the public in Second Life on 17th June 2021. Patch Linden gave his opening address at SL18B Live Stage. Patch briefly talked about the new user experience, the next LH theme was announced which is Fantasy and his time working with Brett Linden. Patch Linden talked about Ebbe Altberg and how he changed Second Life for the better. He will never be forgotten. There was a minute of silence to remember.

Brad Oberwager appeared on the special SL18B episode of Lab Gab along with the Leadership Team on Monday 21st June 2021. Brad talked about basically a “four pillars” approach in terms of decision making from what is going to bring in new users?, what is going to make existing uses happier?, what will lead to more engagement? and what is going to offer Linden employees to be happier?.

Brad did mention that he doesn’t expect to see change for change sake for Second Life in the short term however change will come over time.

In early July 2021 Linden Lab started to let new residents go through the new Welcome Islands when using the default Second Life viewer. The new user experience has been completely been revamped with a new layout and a new Welcome Island Guidebook.

Part 2 will be published very soon looking at what happened between August 2021 and December 2021. Stay tuned for that.

Rounding-out the year with Seanchai Library in Second Life

Registration is now open for the upcoming 2022 Home & Garden Expo event in Second Life. The annual event will take place on 26th February through until 20th March 2022. The Home and Garden Expo… More

Registration is now open for the upcoming 2022 Home & Garden Expo event in Second Life. The annual event will take place on 26th February through until 20th March 2022. The Home and Garden Expo is one of the largest and longest running events in Second Life supporting Relay For Life. There will be nine full regions showcasing many styles and genres from furniture, landscapes, houses, decor items and much more.

Blogger applications have opened officially for all those that want to cover the event. There will be blogger access on 24th February 2022 for a early sneak preview of the regions.

The Home & Garden event team are now processing applications and will be sending out notices to all those that are succesful.

Please spread the word about the upcoming Home & Garden Expo for 2022.

Cartoon of the Day: Big Blue 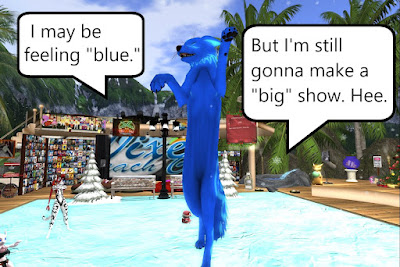 *The Bellisserian Bureau of Bureaucracy, or BBB, the people who made the popular passport stamp collection system, are about to celebrate their Second anniversary. It will be an eight day celebration, starting on Sunday January 23.The party will …

The Bellisserian Bureau of Bureaucracy, or BBB, the people who made the popular passport stamp collection system, are about to celebrate their Second anniversary. It will be an eight day celebration, starting on Sunday January 23.

The party will run from January 23rd to February 1st and will open on the 23rd with a boat rally and DJ dance event, followed by a grand Opening Ball and fireworks. The full schedule of events will be published in the next edition of the Gazette and will include (among many other things) an art exhibition on the theme of travel. 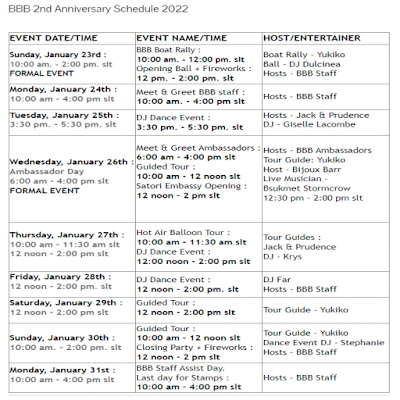 There will be events every day of the celebration, such as DJ parties, boat rallies, and Meet and Greet events with the Bellisserian ambassadors. There's also an art exhibition.

The event will be held here : http://maps.secondlife.com/secondlife/Bellisseria%20Fairgrounds/163/240/24